Our annual Garden & Home produce show on 10th August 2019 was well supported by both exhibitors & visitors despite the weather & change of date, with similar entry numbers to last year & an excellent standard of exhibits. We feel as if we’ve come of age now that we’ve had several successful years in a row!

The exhibits in the Home Grown Flowers classes 1 – 9 looked particularly stunning against the light of the windows as you’ll see from a good browse through both of our gallery pages, and there were 8 super entries in class 27 (5 Vegetables on a Tray), won by Val Wroe. Competition was close and Martin Plater won the Lewis Cup for the highest number of points in the vegetable classes, with June Morris retaining the Tom Ethelstone Memorial Trophy for the most overall points, both well deserved (Ivy Evans presented this trophy on behalf of Sue Ethelstone who was sadly unable to attend due to the very regrettable late change of date). The members-only class 37 Fuchsia “Dollar Princess” which members had grown on from cuttings given out earlier in the year was won by Derek Roberts who is currently deciding which of the two donated prizes to accept…the other one will be retained by the club for a future competition.

Many thanks & well done everybody – continued happy gardening to you all!

2018 Show Our 2018 show was held on Saturday 8th September. After the challenges of the summer drought came the heavy rain but this didn’t deter our members & we had an even higher number of entries than last year – 269! There were some fabulous exhibits & our judges commented on the high standards of the entries which filled the village hall with a beautiful display. There are lots of photos on our Gallery Page and a report on the blog. A big thank you to everybody who entered, supported and helped out. June Morris won the Tom Ethelstone Memorial Trophy for the highest number of points overall, & Ivy Evans scooped the Lewis Cup for the most points in the vegetable classes. And our members’-only class for the pots of Acidanthera that we gave out as bulbs in spring gave a perfect backdrop from their vantage point on the stage. Well done everybody! 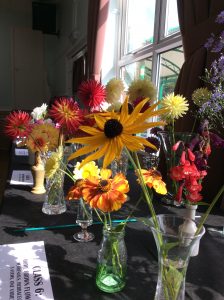