We were delighted to resumed our monthly club meetings from August 2021, and below is our recently announced programme for 2022. The meetings are all on Tuesday evenings in the Village Hall and the presentations start at 7.30pm so members generally arrive about 7.15.

We are currently running without our usual refreshments and competition, and as we are not collecting annual subscriptions until next year’s usual renewal date, we have asked members (and visitors) who come along to pay £3 on arrival towards costs, which will include entry into the monthly raffle. The list shows the name of our speaker followed by their subject.

13th September: Howard Drury – The Men who Inspired Me

We continue to offer members the opportunity to attend a wide range of Zoom meetings courtesy of the  Tender Shoots Garden Club Network. Details of how to join these meetings were sent out via email and the speaker factsheets for the earlier talks can be downloaded via Tender Shoots Factsheets . Dates and times of next year’s Zoom speakers will be posted shortly, and the start times shown allow you to join our own chat room beforehand and the presentations begin 15 minutes later.

If you prefer not to use Zoom the talks are live-streamed on the Tender Shoots YouTube channel starting 15 minutes later than the times shown. Several of the talks are also available on that channel for a month or so afterwards. The advantage of YouTube is you can start the talk from the beginning if you arrive late, pause, rewind & skip any bits. Anybody who has a Smart TV with YouTube app can watch the meetings on that, plus if you have a slow internet connection, YouTube can work better than Zoom. 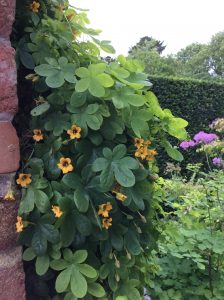